It’s the final day of the 2020 Betfred World Matchplay. The action concludes at the Marshall Arena in Milton Keynes, Buckinghamshire.

By tonight someone will be the champion! Can Anderson win his second World Matchplay title, his 9th major title and his first TV title since the Champions League? Or will Van den Bergh win his first ever major title?

The Final the best of 35 legs with each game must be won by two clear legs, with up to a maximum of five additional legs being played before the sixth additional leg is sudden-death. Should the match reach 20-20, then the 41st leg would be the final and deciding leg.

Nervy start from both players, but first blood goes to Van den Bergh after taking out 60 on tops. Anderson 0-1 Van den Bergh.

First break of throw goes to Anderson, after he takes out 80 on tops for a 15 darter. Anderson 2-1 Van den Bergh.

Anderson misses double 8 for a 124 checkout, but goes into the big 18 next visit when trying to hit double 4. Van den Bergh then lands double 8 to break back and level. The 127 to leave 32 was superb from the Belgian. Anderson 2-2 Van den Bergh.

Advantage to Van den Bergh at the first break, after he lands double 6 with his final dart. Anderson 2-3 Van den Bergh.

Anderson moves back level with a 56 finish on tops! Anderson 3-3 Van den Bergh.

Anderson misses double 5 to take out 90, but is let off the hook after Van den Bergh makes a pig’s ear of the 87 finish. Anderson returns and eventually lands a clutch double 1 last dart to level once more. Anderson 4-4 Van den Bergh.

Van den Bergh leaves 49 after 12 darts, but Anderson snuffs him out with a 14 darter and a 61 checkout on double 18. All square going into the second break. Anderson 5-5 Van den Bergh.

Van den Bergh misses three darts at double 16 and he is punished by Anderson who racks home a brilliant 130 checkout on double 5 to break! Anderson 6-5 Van den Bergh.

It’s taken fourteen legs but Van den Bergh lands the first 180 of the final! However the Belgian misses tops and tens for a 94 checkout and Anderson takes out 50 on tops to once again level this final up. Anderson 7-7 Van den Bergh.

Anderson misses bull for an 89 finish to break and Van den Bergh takes advantage on double 10 to go a leg ahead at the first break. Anderson 7-8 Van den Bergh.

Van den Bergh is setting his eyes on his first major title after moving three clear with a 64 finish on tops. Anderson 7-10 Van den Bergh.

Van den Bergh misses double 14 and double 7 for an 88 finish, but after going inside double 7 next visit, he hits 5 and then a cool double 1 to restore his three leg lead! Anderson 8-11 Van den Bergh.

Van den Bergh fires in his second 180, then takes out 47 on double 16 for a crisp 11 darter. Van den Bergh is four clear at the fourth break and six away from his first major title. Anderson 8-12 Van den Bergh.

Anderson misses bull for a 127 finish, but Van den Bergh continues to fire after putting away a stunning 132 checkout on the bull!! Dazzling stuff! Anderson 8-14 Van den Bergh.

Bit late to the party but Anderson fires in his first maximum of the final. He then misses double 8 for a 136 checkout, but finds a class double 2 last dart  under pressure to stop Van den Bergh’s charge! Anderson 9-15 Van den Bergh.

Van den Bergh misses tops on 78, but returns to land double 10 to move two away from the title and take a heavy 7 leg lead at the fifth break. The mini session of his life! Anderson 9-16 Van den Bergh.

Van den Bergh lands his third 180, but Anderson (needing a huge comeback) pulls one back with a 13 darter on tops. Anderson 10-16 Van den Bergh.

Cruel for Van den Bergh as he suffers a bounce out when going for the big 20 when trying to take out 80, but returns after Anderson missed tops and tens. Van den Bergh finds tops second dart and he’s a leg away from his first major title! Anderson 10-17 Van den Bergh.

Anderson misses tops for an 82 finish, but Van den Bergh can’t take 80 and gives Anderson another chance! He misses three darts at double 10 and Van den Bergh needs double 16 to become the 2020 World Matchplay champion. AND IT’S THERE FIRST DART AND DIMITRI VAN DEN BERGH IS THE 2020 WORLD MATCHPLAY CHAMPION! HE WINS HIS FIRST EVER MAJOR TITLE AND BECOMES THE FIRST DEBUTANT TO GO ALL THE WAY TO THE GOLD! WHAT A STORY!!!

My dreams have come true, what a beautiful trophy, I’m so happy,”

“I have so much respect for Gary, to beat him is showing me how far I have come and now I know I can win, I can’t believe this.”

“The world is going through a very difficult time and the PDC, Barry Hearn and Matthew Porter have given me a chance to live my dreams when it hasn’t been possible for other, so thank you to them,”

“I spent a lot of time with Peter Wright over the lockdown and he has taught me so much, I’m so grateful to him and his family for everything they did for me during a difficult time.”

“He played well right from the off, I just wasn’t there tonight. All credit to Dimitri, he is a lovely lad and deserves his win tonight,”

“I’ve got a few weeks off now to sort a few things out, I had a few issues with my grip and darts dropping low but no excuses, he deserves it,” 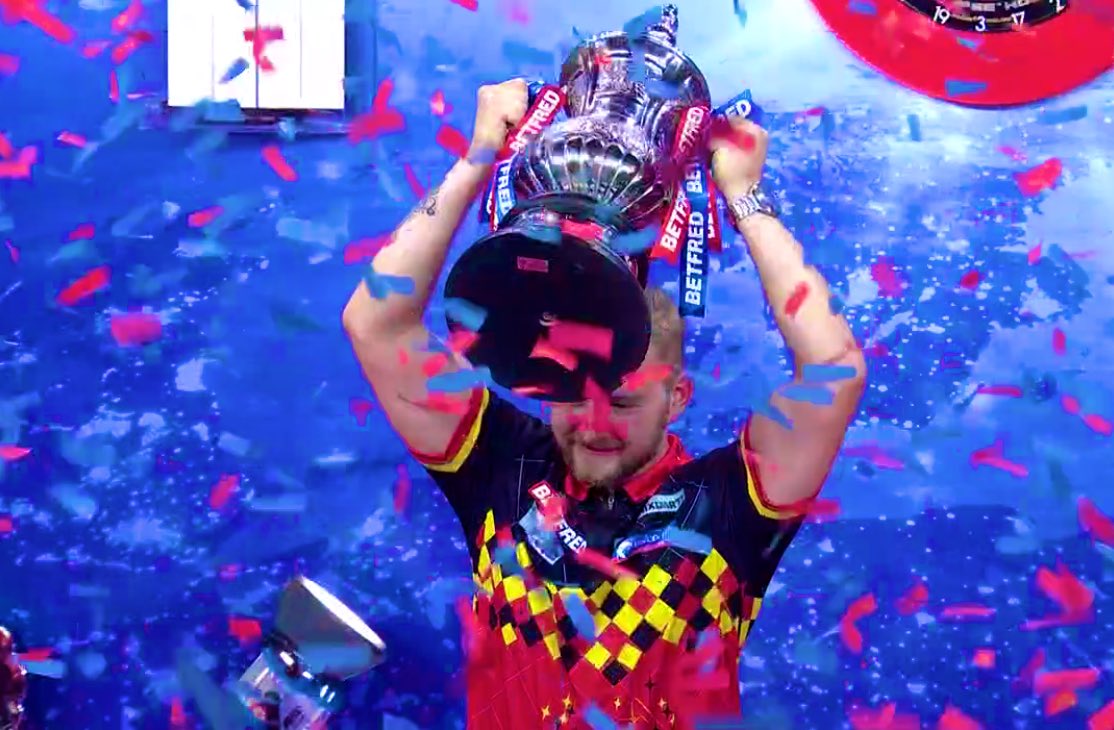 All Things Darts is Facebooks number 1 darts community and group!

Any cookies that may not be particularly necessary for the website to function and is used specifically to collect user personal data via analytics, ads, other embedded contents are termed as non-necessary cookies. It is mandatory to procure user consent prior to running these cookies on your website.